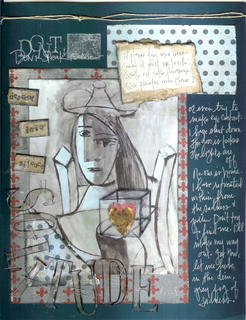 Jill Scott, you are all that is cool.

Bill thought it would be great to have a family night. Of course I'm always game for an activity, so we went out to grapevine mills mall and ate Shrimp Quesedillas at La Salsa (YUM.) and then played Lunar Mini-Golf. This is exciting stuff ya'll. It's mini-golf played in the dark with black-lights. The holes are painted neon colors, and there are seizure inducing murals and stripes and stars everywhere. The kids had a blast. I was having fun too, until about halfway through I looked down and realized that my orange shirt was just a bit more see-through when the underlying white bra is blacklit. So I slung my tiny gold purse over my shoulder and played half suffocated and seething with embarassment. Bill wanted to go to Books-a-Million (just for you, Miss.) after that, and I headed to Marshalls and Old Navy for some retail therapy, though I was constantly checking myself to see if my shirt really was THAT see-through! (It wasn't, but I'll never be certain....) Oh well. Bill must have liked it, because he asked me to go OUT the next night! Hoo-ray!

Went to bed late, and didn't sleep in. Bo had his first soccer game, and the church was meeting in the park at nine.

After the meeting, I arrived at the game late and slightly panicked because I had Bo's cleats and shin-guards, and Bo immediately started crying because I brought Emma's water bottle instead of his gatorade bottle. Sigh. He cried on and off for the first quarter. Bill was running in the field with the kids, and did look rather sporting in green jersey and spankin' new shorts. The kids looked like they were having a lot of fun (losing) and were totally into it (trying to bribe them onto the field by the third quarter). They did seem to have alot of fun. Bo said he did. I assume that's when he wasn't crying.

We came home and futzed around the house for a while, I worked on a project for a certain someone who's birthday is Thursday, and Bill watched football. The kids did their usual weekend play of pretending anything and everything and having grand adventures from room to room together.

Then Jenna, babysitter extraordinare, arrived and we flew out of the house with our free movie tickets (Thanks, Petr and Bonnie!) and went to dinner and a movie. Such fun! We ate in the food court, and saw I Was a 40 you know the rest, and laughed and cringed and flinched and laughed again. It was hard to watch, but man. That waxing scene and the ending scene had me laughing until tears were running down my cheeks. It's amazing what you can watch in a dark room full of strangers that you never could watch with people you know!

Went to bed late, and didn't sleep in. That's the story of my life right now. We ate at Rise and Shine and had our usual meals and the usual jolliness all together. Came home and cleaned...felt sooooo good to get sheets washed and the wretched bathrooms cleaned. Alison came over and we watched Strictly Ballroom (LOVE IT.) while Emma danced around the den. Dinner was forgetable, bath and bed.

I did the page Friday, and it was a good reminder of where I have been, and where I am now. Three years ago, this was my state of being. I am in such a better place now, thank you Lord. Thank you Bill. Thank you Texas.

Bill has just come home with a oreo blast from Sonic and the second disc of Lost season one. So I'm obviously getting off the internet now!

nice bra story...cracks me up. sounds like something i would do.

that movie is HILARIOUS. i loved it! made me laugh so hard.

Um. Maybe I just revealed a bit too much of my nerdiness.

Mmmm... oreo blast... must not write about such things when you know a pregnant woman is reading! ;)

This page is amazing. Love your work..... keep posting!
Steph

love me some jill scott!!! love that page! i gotta go find it on 2Ps so I can leave you some pea praise. that is a serious page.

so much here to comment on that i can't remember.

I just love that page! I have the same seizure inducing putt putt at my mall! It's so fun! I loved it! I really hope that I left you pea-praise on that page... If not, know that I be lovin it! :)

This is pretty powerful page, Sarah.