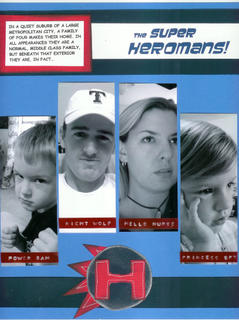 I'm loving these effer dares! Even though the last one was SOOO hard, I felt like I HAD to do it, and it was ok! The latest one was "scrap your superpower." Well, for myself, I feel like that was covered in dare #5, (you ladies know what I'm talkin' about, uh huh!) so I scrapped my family.

We are supers. We watch Incredibles, and we wish we were them. Bill was a serious comic book fan, and is raising one in Bo. I, though I preferred Archie in my younger days, have really enjoyed some of the newer shows/movies and can totally get into that hero/regular joe story. Bo has had an Alter Ego named Power Bam since he was 2 years old. Power Bam has a blue suit, a red cape, and red zip up shoes. He has more powers than you could dream of. He is one cool super hero. Emma is Ballerina Princess Spy, shortened to Princess Spy for spacial reasons, and she has many types of vision....you know....x-ray, night, heat, etc... Bo came up with Night Wolf for Bill, because (I think) he stays up so late. And he thought the name was "totally sweet." No one came up with one for me, so I adopted the one that my nephies gave me years ago. "Hello Nurse." ( Thanks dudes. I knew I could count on you. And I'll never reveal your secret identities, Zachinator and Disgustinator.)
We really got into Smallville for awhile, and decided to give each other super powers. Mine was: "You got hit with some meteor rocks, and you gained the ability to ask for help, and accept it." Bill's was: "You got hit with some meteor rocks, and you gained the ability to take no for an answer." (Don't hate, Bill. It was funny.) Cole, type yours in the comments- I can't remember, but I'm pretty sure it had something to do with "cute!"

I typed a big long thing here about superheros/hurricaines, and deleted it, because I don't want to get controversial....but I haven't forgotten.
Lord, the Gulf Coast.

PS (I am grateful for your indulgence regarding the overuse of the parentheses in this post.)
Posted by Sarah at 10:10 PM

You know I'm in training to be a cage fighter, Napoleon. So yeah, I guess you could say it's pretty serious...

I know what you mean... I keep teetering on the edge of writing *my thoughts* about the whole Katrina thing- but then I'm like, what's it gonna do? (Other than allow myself to vent.)

I don't know if you read Cherry Moon's blog, but she did a couple of entries recently on Katrina that were very eloquent and basically said a lot of what I was thinking...

Watch out for meteors. ;)

Lol... I think we decided that being cute is more an integral part of my personality than a superpower :) My superpower was that every ridiculous and impractical pair of shoes i fall in love with won't hurt my feet and I'll be able to run effortlessly in them. (apparently, though, my abilities only work when I'm in the company of other supers, as my newest pair of 4-inch, turquoise snakeskin heels with massive turquoise daisies on the toes will attest. But they're more for my soul than my soles anyway:) ) Love you!

i love that page. so creative! i love how you included everyone.

Unbelievably clever. . .(sigh). . . I don't know how I came to have a friend like you. The super family. So right on.
I wonder how Phil and Angele Warmanon are? She had family in NO didn't she? Does anyone know?
Did I see Bill serving food on our news item showing folks in Baton Rouge helping out? Or does BR have a pile of Bill lookalikes there? (More like).
Love you heaps

You forgot to put your first super husband...Walter Croncite on this page...Or do you have a special page designated for him? Either way, it's a great page, and I couldn't agree more with it's theme!

Yea. Out of respect, I thought I'd leave "Super Old" out of the family portrait.

He'll always be with me, though, won't he?

Hey, Jenny, when you came to Baton Rouge, didn't you realize how much we all looked alike? It wasn't me on the news, so it must have been one of the other tall, compassionate and extremely handsome guys who live there.