Oh. My. What a week its been in America. Alot of destruction, alot of horror, and alot of finger pointing. I say: now is not the time to be pointing fingers. if you've got a finger to point, use it instead to lend a hand. That's all I've got to say about that....

Sitting here, feeling sick, reflecting on all the major and minor dramas of this past week. (so glad he's outta your life, sweets) Bo's class was sorted into groups today, and he's du-du-du! Gryfindor!! Just kidding. But he does have a Mrs. Mc for reading. Emma missed him alot today...she has a hard time after the weekend...they are very close. A. came over to play after school and it was like having teenagers around. Bo and A. trying to do homework, and Emma talking to A the entire time. The only time Bo doesn't want her around is when he wants some serious lego time, and then he slams the door to her roars of dispair. That usually happens around 7 on a Sunday morning. Very nice.

So what I really wanted to post was this. I am not uber-fond of making my children promise me things----I have a distinct memory of promising my mom when I was 14 that I would NEVER wear eyeliner on the inner part of the lid under my eye, and I hate feeling the twinge each time I break that promise. I was hugging Bo yesterday, and realized that he was growing, and I had not really been seeing him. So I asked him to promise me something. Then I told him, half-way teasing, that I wanted to write it down and have him sign it. We discussed several other topics in the course of our exchange and I heard him say "I don't really care about writing it down." I wasn't sure what that meant, until a wrinkled piece of notebook paper was slapped down in front of me on my desk. After reading it, and discussing the meaning of the word "solemn" (he could read it, he just didn't know what it meant!) he signed with alacrity. 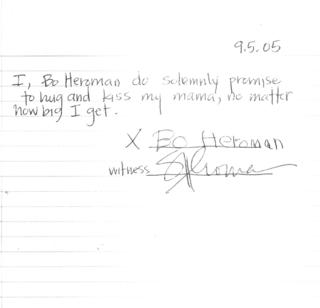 Ain't I the lucky one?
When Mom heard the story she gave a glance at the small girl skitting around the room in efforts to stall our departure from their house and said "I think that's the one you'd better be getting the promise from!"

Ahhhh, what a treasure, to have it signed and sealed in print. :)

See my blog for further insites...:)

How too too cute! Yeah, I know THAT'S gonna be scrapbooked!

Btw, I've been meaning to tell ya- love the new avatar pic!

that is too cool. my mom kept a lot of stuff like that from my childhood and i LOVE that about her.

ps- got that white pen from michaels..the cap says "uni-ball signo UM-153" - hope that helps. its my favoritest white pen ever, if you cant tell. haha!

I must say that I don't recall making you promise about the eye liner. Really! Surely I could have come up with a better promise than that! Such a vulgar display of control on my part! How about..hmmm...living within a block from me when I get old?
Love the superhero family!
Mama