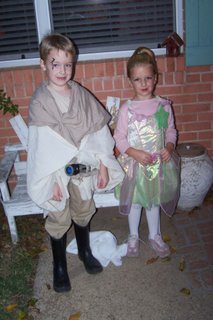 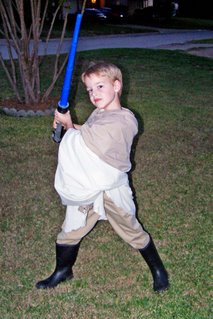 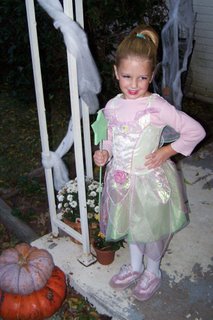 Now Tinkerbell was just cute. Cute, cute, cute. Golden Sparkly hair. The turquoise ribbon. The pink cheeks and lips. Ceeee-yoot. Em and I painted that wand together. I was going to add some ribbons, but she wanted it just "gween and sparkwy." Who am I to argue with that? She called me in her room tonight (about an hour after she had gone to bed) saying "Mama! I neeeeeeeed you!" When I went in to tell her that she probably didn't, she said "Mama, don't forget to start the laundry tonight." I don't know whether to be impressed with her domesticity or to just be insulted.

Random thought. When some one throws a lighted cigarette out of their car, and I run over it, there is a split second that I am certain that my car is going to explode. I am always very relieved when that doesn't happen.
Posted by Sarah at 9:55 PM

What cuties!! My middle son wanted to be Darth Maul...I said no, but we compromised...I let him wear the outfit without the ugly bad guy mask...he was happy I was happy...it was all good. Glad you had a nice Halloween!

Precious!
I had a Tinkerbell too.

you know, i've always been afraid that the lit cigarettes are going to melt my tires somehow. hee hee

omgosh...i have the same irrational car explosion fear. reading that just about made me wet my pants! ;)too funny. so glad it's not just ME!
and the kidlets....adorable...as always ;)xxxxxe

omgosh i think that too! about the cigarettes. cute cute CUTE kiddos.

check it out! they are so cute!! i love halloween

They were! They are cuuuute! Me too about the cigs. Does that make us panic attack people? Hmmmmm....
Happy Monday dear.

OMG
you are so funny
so
so
funny