The coffee shop is open for business.
If only it weren't 30 minutes away.
Not that it stops me from going, but it sure would be nice.
It's called Buon Giorno and I could (and have) spend many hours there. Jenny has created a warm, hip, inviting, stimulating environment. She is so fabulous with design, and she has worked so hard. I feel very proud to have helped just a little.

Here's a little creation called a Tuscany Mocha. Dark chocolate and orange. I've never had a refreshing coffee before. It was faboo. 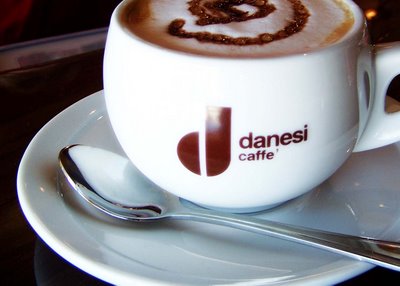 This is the "six o'clock lounge" otherwise known by some of the adults (who obviously know things) as "make-out room." 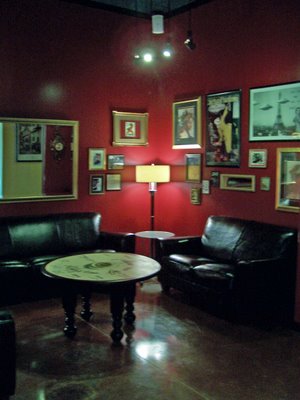 Emma and Mom at the counter. It's her last day to be four. She'll be five tommorrow. 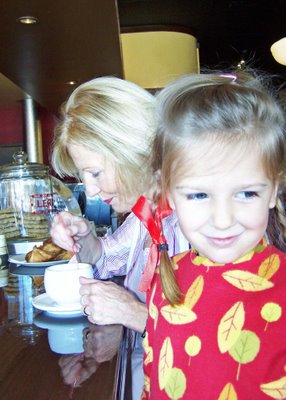 Jen painted this table. Isn't it so cool? She is just oozing talent, is our Jenny. 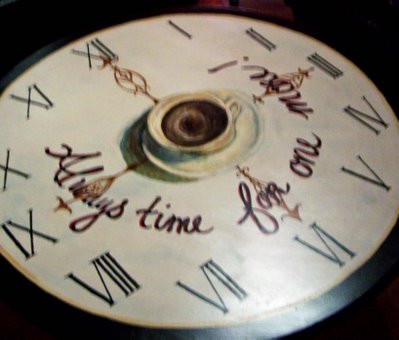 So tommorrow is the Princess Party. I'm so excited about her present, I could just spit. I mean it. And I could also spit because I went to Target at 9:30 at night to get a new battery for my camera and they were OUT. grr. We do have the movie camera though. Watch this space.

PS. the coffee shop is in Grapevine, if you are in the area.

that cup of coffee looks AMAZING!
i love the mocha valencia's at starbucks, but i'm sure that one was way more tastey than starbucks could ever be!

ooohh, she's gonna be 5?
she is adorable.
a princess party sounds perfect!

that is a very cool place!!!

How lovely! Jenny is a very talented lady! Coodos Jen. You too Emma. You are growing up so fast! Love you!

i wish i could go with you to that coffee shop

It truly is a very fool shop. My cappichino with soy was delish...I got a heart on the top of mine! (How do you spell it?) Happy Birthday dearest Emma!

(Rockin' coffee shop! I wish I could go!)

I am soooo THERE! And indeed, soon will be - at least in the States! Yay. I'd be at that shop every day, really.
Hippy Pappy Bthdthday, as Pooh would say, to EMMA. Aw 5!!! Amazing. What a gal.
See you SOON

i'm not a coffee drinker but that looks DELICIOUS!!
enjoy the princess party!!

that place looks super cool, and i love the layouts below!