I"ll call it "The Tumbler" 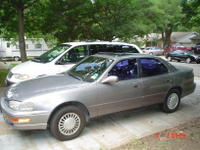 Having invested ridiculous amounts of money we don't actually have- in a car we don't really drive that much, we decided to sell the van. Not that this breaks my heart, mind you. I never wanted to be in the mini-van driving class of women, but the gas mileage is killer, and we discovered we could save money by getting a different car. (If you read "different" as "older" you read that correctly.) Well, Bill went out yesterday and found this Toyota Camry and brought it home to me. I really like it! I know it's a 1992 model, but When I Was in High School, I thought this was one of the coolest cars ever, (I was/am a dork) and I have to say, I love the squareness of it more than the newer "used bar of soap" shape.
Now shout with me, ladies...it has a SUNROOF! All I have to do is open up that sucker, play some Spindoctors, Smiths or Cranberries, and I will feel like the coolest 17 year old ever, although in actuality, I will be the cheesiest 30 year old EVER. Ah me. Life is so much more fun in my head.
The fragrance they put in it is not "new car smell." It apparently is something coconutty, which should be called "Eau de Tanning Salon." I feel like putting on the blinders, rubbing on the lotion, and crashing on those cold creaking lights that warm up so nicely. I think that could be hazardous to the other people on the road, so I stay in my head for that one too.
The interior is black and grey, and feels very batmobile, so I can pretend that Christian Bale is with me too! Then I REALLY feel 17! (B understands- I had a terrible crush in High School, and he is, after all, the best Batman EVER.) Now, even in my head-that fantasy cannot possibly stand, so I'll just stick with the music and the smell.

Can't you see the resemblance?
Posted by Sarah at 9:56 PM

Loved this entry! Totally cracking me up! How fun is that- a *new* car. :) Congrats!

Hey, who's that in your rear view mirror? Is that me, driving Kit from Knight Rider? With Wonder Woman in the passenger's seat?

"Michael, I don't think that's what she had in mind."

Thanks for the advice, buddy!